“Referee Paging System” which is used all over the world for Football (Soccer) games.  Insert NFP-P0612 to offer vibration alerting. 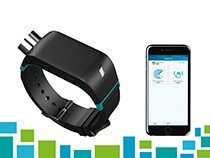 Our LVM-Series linear vibration motors NFP-ELV1411A is used for SUNU BAND– a smartwatch that is enhancing mobility for the visual impaired. 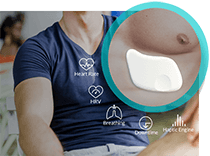 The Lief is a discreet biosensing patch that measures your heart and breath. Lief teaches you to control your body’s natural stress response through gentle, safe biofeedback exercises. 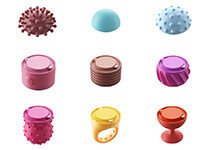 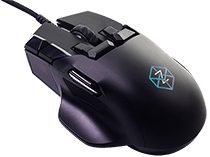 NFP-Motor is a manufacturer of providing cylindrical, coin vibration motor used for haptic feedback in products such as cellular phones, wearables.

In order to let customers better understand about LRA linear vibration motor, product prototype stage test, provide free linear vibration motor for testing, only need to pay for the shipping fee to receive two types of 10pcs LRAs for prototype design, next day shipping, 3- 4 days to worldwide by DHL door to door. The first type of NFP-ELV1030AS with 10mm short lead wire, its vibration force is about 1.60G ~ 1.80G depending on the resonant frequency of linear resonant actuators.Generally the linear resonant actuators have a quite narrow resonant frequency, what’s the meaning of it? The narrow resonance is the behavior of the spring and mass that is inside the LRA vibration motor. An LRA will have a resonance at one frequency with a steep drop on either side. Thanks to TI’s auto-resonance algorithm dynamically determines the resonance frequency as the actuator is vibrating. To learn more -> https://nfpmotor.com/products-linear-resonant-actuators-lras.html

That all these three LRAs above should be used with a driver IC such as the TI DRV2605L. TI (Texas Instruments) sell an  evaluation board with this IC chip on it. Check the link: https://www.ti.com/lsds/ti/motor-drivers/motor-haptic-driver-products.page

They will not work with DC  battery voltage!!!

If you are not quite sure about choosing the LRA(linear resonant actuator) driver, you may lrean from the following link first:

All our products are 100% tested by DRV2605(03)EVM-CT. Use the IC DRV2605L – Haptic Driver for ERM/LRA with Built-In Library and Smart Loop Architecture. To learn more about the IC driver from TI: https://www.ti.com/lsds/ti/motor-drivers/haptic-driver-products.page#p2126=LRA, or contact us for help about LRAs.

Haptic click carries DRV2605, a Haptic Driver for ERM and LRA vibration motors (acronyms stand for Eccentric Rotating Mass and Linear Resonant Actuator, respectively). The DRV2605 IC integrates an extensive library with over 100 haptic effects. These include audio-to-vibe features, which generate vibrations from the lower frequency range of the audio input (licensed version of ToushSense® 2200 effects from Immersion™).

The use of ERM vibration motors in personal electronic devices was first pioneered by Motorola in 1984 with the introduction of this feature in their BPR-2000 and OPTRX pagers. Silent call means and compact vibration motor is built and the called communication device to provide a vibration to the user and the feedback. Today there are alternatives such as linear resonant actuators LRA, also know as lra actuator, linear actuator, which offers high reliability in a very small package size. These are typically used as actuators in haptic feedback applications and for basic vibration alert functions.The main applications of the linear vibration motors are mobile phones, smart phones, small devices that require a wearable device and other vibrations.

– Compact / ultra-thin , low-noise high efficiency and reliability, enhanced design drop impact.
– Can accommodate a wide variety of user different kinds of applications.
– Rapid vibration response (Rising time, Falling time) and minimize residual vibration design.
– Low power consumption compared to the vibration characteristics implemented through the low voltage.
– Linear Motor vibrating in direction Z with a very long life time of 1 million cycles at the test mode 2s On 1s Off as one cycle.
– Linear Motor also have a very strong acceleration/ vibration force at its peak acceleration value around 1.7G.
– To use these Linear resonant actuator, users need to add IC drivers in the PCB to activate these motors.
– These LRAs are specially for high-end and high reliable electronic consumer products.

A linear resonant actuator is a precision vibration motor that produces an oscillating force across a single axis. Unlike a DC eccentric rotating mass (ERM) motor, a linear vibration motor relies on an AC voltage to drive a voice coil pressed against a moving mass that is connected to a spring. When the voice coil is driven at the resonant frequency of the spring, the entire actuator vibrates with a perceptible force. Although the frequency and amplitude of a linear resonant actuator may be adjusted by changing the AC input, the actuator must be driven at its resonant frequency to generate a meaningful amount of force for a large current.

How Does LRA Produces A Vibration

The voice coil remains stationary inside of the device while it produces a vibration and presses against a moving mass. By driving the magnetic mass up and down against the spring, the LRA as a whole will be displaced and produce a vibration. The underlying mechanism resembles a speaker producing sound. In a speaker,air is funneled through a cone and displaced at different frequencies by turning an AC frequency and amplitude into a vibrational frequency and amplitude internally, a speaker finished this task by moving a magnetic mass with a fast-changing alternating current. Unlike a speaker, which can be driven at arbitrary frequencies, an precision vibration motor is useful in haptic applications within a specific frequency range.

Rather than directly transferring the force produced by the voice coil to the skin, the device optimizes for power consumption by taking advantage of the resonant frequency of the spring. If the voice coil pushes the magnetic mass against the spring at the spring’s resonant frequency, the device can produce a vibration of higher amplitude more efficiently. Since the voice coil is driven by an AC current, modeling the desired frequency and amplitude of vibration, the frequency and amplitude may be independently modified. This is different than an ERM motor, which couples the two properties of the resulting vibration.

How To Controll The LRA’s Frequency To Optimize Its Power Consumption?

Although the frequency can be changed, the LRA (linear resonant actuator -linear vibration motors) will typically be operated within a narrow frequency range to optimize its power consumption if the device is driven at the resonant frequency of the spring, it will consume less power to produce a vibration of equal magnitude. Regardless, this improvement alone presents a unique advantage over ERM motors: a precise waveform of varying intensity over time can be reproduced in an precision vibration motor with a fixed frequency, whereas a waveform of varying intensity in an ERM motor will also produce a varying frequency of vibration. UI/UX support for high usability due to various haptic effects. High vibration force touch, ultra-slim form factor, low current consumption. Real haptic feedback provided by various haptic patterms.

The typical start time for an linear vibration motor is approximately 5-10ms, a fraction of the time required to produce a vibration with an ERM motor. Spring design and stress analysis. Electro-magnetic field design. Fast response time, control of vibration force for long life. This incredible speed results from the immediate movement of the magnetic mass as current is applied to the voice coil inside of the device. In an ERM motor, the precision vibration can only be produced after the motor reaches its operating speed even when over-driving the linear vibration motor to produce faster acceleration, the motor can require 20-50ms before reaching a desired intensity of precision vibration.The stop time of an LRA can be significantly longer than an ERM motor. An linear vibration motor can take up to 300ms to stop vibrating due to the continued storage of kinetic energy in the internal spring during operation. Thankfully, an active braking mechanism can also be used for an precision vibration motor (vibration actuator) by performing an 180-degree phase shift of the AC signal provided to the actuator, the precision vibration can be stopped very quickly (within approximately 10ms) by producing a force touch opposite to the oscillation of the spring.

1. Maps: Maps are one of the most important functions utilizing haptics, as the “Maps” app on the is capable of giving directions by providing tactile feedback on each turn so the user knows which direction to turn.
2.Heartbeat: The haptics will perform the simulation of heartbeat. Users can send the Heartbeat vibration from one to another.
3. Notifications : also utilizes the for notifications and confirmation purposes. For example, when a Pay transaction goes through, users will feel a pulse on their wrist indicating that the payment was successful.